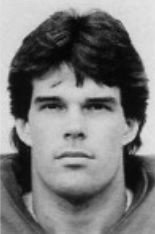 1989 Media Guide: Redshirted last year … dependable athlete with good lateral movement … will compete for a backup spot on the weak side … has a good understanding of the game and is very competitive … coming off a good spring … will undoubtedly see some action as a member of the specialty teams.

High School: Three-time all-league and all-area … played in just two games his senior year (the fifth and ninth of the season) because of a preseason knee injury … had 29 tackles in those two games as a senior … prior to being hurt was touted as one of the top linebackers in the state … had 22 career catches for 429 yards … twice an all-conference basketball pick … captained both the football and basketball teams.

Personal: His father, John, captained the Tennessee basketball team in 1962 … lists his career objective as owning his own business.