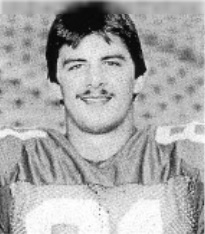 1986 Media Guide: An example of how a good athlete can play major college football even though he attended a small high school … was moved to tight end in college.

1985 Media Guide: A strong showing in spring drills indicated he is ready to help … provides good depth at tight end, Ohio State’s deepest position … a determined blocker who plays with all-out effort … caught six passes in the spring game in Berea and four in the Ohio Stadium game … practiced as an outside linebacker in 1982 but did not see any game action … moved to tight end in the spring of 1983.

1983: Saw brief action in three games as a freshman.

High School: Was a quarterback and linebacker at Waterloo High School.