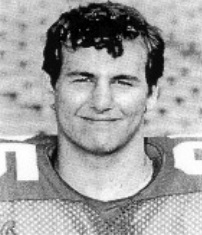 1986 Media Guide: Has practiced both as an inside and outside linebacker but figures to be used at the inside position in 1986.

1985 Media Guide: Practiced both as an inside and outside linebacker in 1984 but will concentrate on the inside position this season.

1984: Saw action in ten games … credited with eight tackles and broke up one pass … caused one fumble and recovered another.