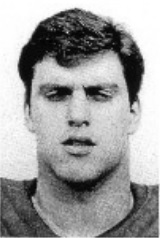 1989 Media Guide: The most physical of the tight ends … has the potential to be an excellent blocker if he can become more consistent … big target with good hands … good goal-line blocker … also plays on the specialty teams.

1988: Surprisingly good spring showing elevated him to the No. 2 spot last fall … played in 10 games, missing only the Purdue contest … used chiefly as a blocker in the Buckeyes’ two tight-end set … lone pass reception came against Syracuse … 11-yard kickoff return against LSU set up a Buckeye TD.

1988 Media Guide: Will back up Jeff Ellis … had an exceptional spring, coming virtually from nowhere to lock up the No. 2 spot on the depth chart … will be the second tight end when OSU uses a double tight end lineup … has added 10 pounds since last year … very competitive.

High School: An all-Ohio tight end as a senior … also punted (40.9 yards per kick as a senior) and kicked off … had 15 quarterback sacks his senior year … Loudonville was 18-5 his last two years and made the state playoffs both years.

Personal: A member of the Fellowship of Christian Athletes … lists Ozzie Newsome as one of the athletes he most admires … enjoys all sports … his father is a science teacher.