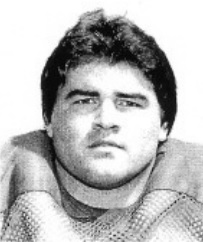 1985 Media Guide: First enrolled at Michigan in the Fall of 1982 … dropped out of school and took courses at Cleveland State University before transferring to Ohio State in the Fall of 1983 … a shortage of credit hours kept him out of action for the 1984 season … participated in 1985 spring practice … will be used at defensive tackle, although can play outside linebacker.

High School: An all-Ohio linebacker at St. Edwards High, where he won 11 letters in four sports … Ohio’s “Lineman of the Year” in 1981 … a member of the St. Edwards High Hall of Fame.