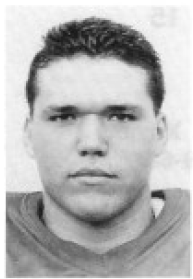 1990: Media Guide: Continues to be plagued by a sore elbow on his throwing arm (right) that could eventually force a position change, possibly to tight end … smart player, who prior to being hurt demonstrated the ability to move the team … very highly recruited in high school.

1989: Looked like he would contend for the No. 2 QB spot, but hurt his arm early and did not play at all during the year … tried tight end briefly, but asked to move back to quarterback.

1989: Media Guide: Redshirt freshman … has the strongest arm of OSU’s three young quarterbacks … not a picture-perfect passer, but has demonstrated the ability to put the ball on the money … very good at X’s and O’s … most comfortable in a drop-back situation … completed eight of 11 passes for 119 yards and one touchdown in the spring game.

HIGH SCHOOL: Twice an all-Angelus League selection … also a two-time all-Big-A Empire team pick … led Servite to 9-3 and 10-2 records during his two years as a starter, throwing for 3,300 yards and 26 touchdowns in that span … set school records for season completion percentage (62) and single-game completions (24) as a senior … won the Servite award for leadership, scholarship and athletics as a senior … other notable Servite grads include Steve Beuerlein and Turk Schonert.