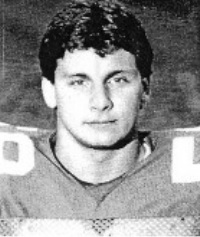 1986 Media Guide: Won a letter as a freshman in 1985 as a member of the specialty teams … will challenge for a backup role as an inside linebacker this year … has added nine pounds since entering Ohio State and has the body build for still more weight … has good speed and is highly competitive.

High School: Attended Austintown Fitch High School, where he won all-district honors as well as honorable mention all-Ohio as an inside linebacker … led his team in tackles as a senior in 1984 … was the leading punter in the Steel Valley League with an average of 39.9 yards per punt.