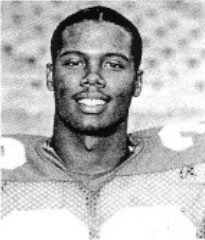 1986 Media Guide: Has seen action as a situation player the past two seasons but figures to see more playing time in 1986 … is a deep threat as a wide receiver because of his exceptional speed … can be used for punt and kickoff returns.

1985 Media Guide: Caught a 54-yard scoring pass in one of the spring games … has excellent speed and the ability to get open.

1984: Won a letter, seeing brief action in nine games … caught 36 and 57-yard touchdown passes against Northwestern as a freshman in 1984.

Personal: Hobbies are basketball and movies.