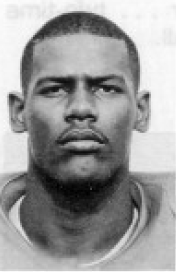 Post-OSU Update: Derrick Foster was pleading guilty in 2009 to shooting two police officers while working as a Columbus code-enforcement office. He was sentenced to five years in jail.

1992: Media Guide: A valuable reserve the last three seasons who will now start, replacing Alonzo Spellman … played in all 12 games last year and started the Wisconsin and Michigan State contests, but saw just 85 minutes of playing time behind the durable Spellman … longest stint was 13 minutes against both Minnesota and Michigan … finished the year with 15 tackles … experienced football player who makes very few mistakes … has battled an assortment of injuries during his career, and has been slowed, too, by an arthritic hip … has six career starts heading into 1992.

1991: Media Guide: Big, strong athlete who will back up Alonzo Spellman … ideal end because of his quickness … has been bothered by a series of injuries throughout his career, including an arthritic hip condition that has limited his practice time, especially his first two years … played in all 12 games last year and finished with 16 total tackles … has four career starts, two of those coming against Wisconsin and Air Force last year.

1990: Media Guide: Moves to defensive end this year and will be a solid reserve … started two games at outside linebacker last year, but a shoulder injury against Boston College limited his playing time the rest of the season … missed spring practice while recovering from shoulder and knee surgery … very explosive off the line and one of the Buckeyes’ better pass rushers … also played tackle his first year, so he can help at a number of different positions … bothered by an arthritic hip condition that limits his practice time, but has not hindered his quickness … a good football player who can step in and start if the occasion warrants.

1990: Played in all 12 games and had 16 total tackles … started the Wisconsin and Air Force games.

1989: Dislocated shoulder versus Boston College and missed the next three games … was used in a reserve role when he returned … had 14 tackles … suffered a knee injury preparing for the Hall of Fame Bowl and underwent surgery in December.

1989: Media Guide: Very much in contention for a starting spot on the rush side … has added 25 pounds since enrolling and is the ideal side for an outside linebacker … has great natural strength and quickness … good explosion off the line of scrimmage and good at rushing the passer … young player who is still learning the position … divided his time early last fall between tackle and the outside, but the coaching staff decided he could help most at the latter … Buckeyes coaches believe he has excellent potential.

HIGH SCHOOL: Started on both offense and defense, but garnered the most attention because of his dominating play on the latter … had 18 tackles for losses as a senior … captained the football and basketball teams and was an all-city cage performer … all-state in football and all-city in basketball.

PERSONAL: Lists Ron Harper and Michael Jordan as two of the athletes he most admires … enjoys swimming and playing basketball in his free time … practice schedule is sometimes limited by an arthritic hip condition.