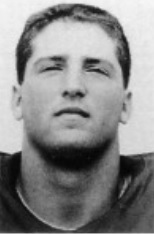 1989 Media Guide: Redshirted last year … played outside linebacker in high school, but moved to the inside last fall … missed most of the spring with a stinger and is still learning the position … coaches like his intensity and desire to excel … just needs to stay healthy so he can get the necessary repetitions … will play on the strong side.

High School: Earned all-Ohio honors at outside linebacker … recorded 95 tackles as a senior from his outside linebacker spot … also rushed for 1,295 yards and six touchdowns as a senior … punted for a 42-yard average as a senior, leading the Greater Cleveland Conference … helped South to a 13-1 record his junior year … was selected the Lake County Player of the Year in 1987 … named to the High School Academic All-American team … made the state shot put finals as a junior.