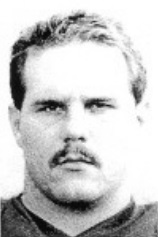 1989 Media Guide: Had an outstanding spring ruined by a knee injury that required arthroscopic surgery … expected back this fall but will probably see only limited action in order to be at full strength in 1990 … prior to being hurt, had projected himself into the center picture and demonstrated the potential to become a very good Big Ten lineman … tough competitor who is still looking to stay healthy long enough to play in his first game.

1988: Bothered much of the year by a chronic lower back condition and did not see any game action.

1987 Media Guide: After a long, agonizing recovery from knee surgery in September of 1985, Dan appears ready to resume football.

1986: Did not play due to a knee injury incurred the previous year.

1986 Media Guide: Missed all of spring drills while recovering from knee surgery.

1985: Came to Ohio State as a guard but was moved to center … suffered a knee injury in a preseason scrimmage that required surgery and kept him out all year.

High School: A four-year starter on the football team and a four-year letter winner in track … Pleasant was unbeaten his sophomore year, posting a 10-0 record in football.