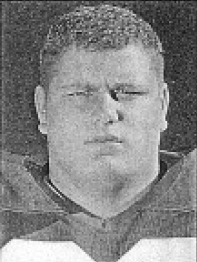 1996 Media Guide: Reserve lineman who has the somewhat unenviable job of backing up All-America Orlando Pace at left tackle … saw only limited playing time last season, appearing in five games for a total of 16 minutes … longest stint was six minutes against Indiana … good young football player who needs experience. but isn’t likely to see a lot of playing right now … does have the size and athletic skills to be a good tackle … began his career at OSU as a defensive tackle, but was moved to offense last fall … has been slowed somewhat by chronic knee problems.

1995 Media Guide: Redshirted last year … played defensive tackle last season, but will be moved to offensive guard in the fall … did not take part in spring drills because of academic responsibilities … a good athlete who could he a real asset at a position where depth is lacking … how much he plays this year depends on how much the layoff in the spring hurt him and how quickly he can adapt to the offensive side of the ball … gives the Buckeyes a physical presence on the inside.

1994 Media Guide: Had 54 total tackles as a senior defensive lineman, including eight quarterback sacks … earned All-America mention and was all-state by both the Detroit Free Press and Detroit News and was an all-metro selection … also played on the offensive line, and earned all-league honors at that position, but wants to concentrate on defense with the Buckeyes … served as a team co-captain as a senior … father is a native of Ohio … has three brothers and a sister … high school coach was Al Fracassa … enjoys fishing in his spare time … would like to coach at the prep level following college.