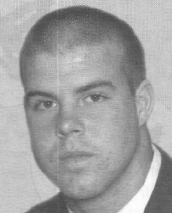 2003: Sat out his first year of collegiate competition learning from a talented group of veteran linebackers – redshirted.

High School: Won first-team All-Ohio honors as a senior and was the co-defensive player of the year in Division I … was the most valuable player in the Federal League … also the Stark County MVP … played linebacker in high school, but is projected as a safety for the Buckeyes … had 130 tackles as a senior, including 80 solos, 17 tackles-for-loss, 12 sacks and two INTs … also ran for 590 yards and had 20 receptions for 250 yards … had 125 tackles and 40 receptions for 970 yards as a junior … finished career with over 350 tackles, 33 sacks and eight INTs … on offense, career totals included more than 1,200 receiving yards and 600 rushing yards … also won All-Ohio honors as a junior … three-year starter in football while lettering three times in track and once in basketball … rated as the 49th best prospect in the Midwest by SuperPrep … 100 and 200-meter district champion in track as a junior … made four-consecutive playoff appearances during his career with two Federal League championships and a Final 8 appearance in 2001 … winning the Federal League title as a sophomore is his biggest thrill in sports to date … high school coach was Don Hertler.

Personal: Parents are Mark and Debbie Lukens … has two siblings, Chad and Corey … would like to visit Australia someday … likes to spend free time hunting, fishing or golfing … playing backyard football is one of his fondest childhood memories … earning the gold pants for beating Michigan is his favorite OSU football tradition … would be playing baseball it not of the football squad at Ohio State.