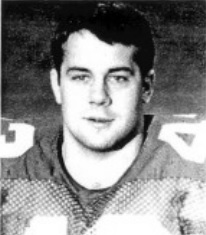 1986 Media Guide: A seemingly endless string of injuries have kept this talented athlete from contributing as he can … the latest was a cyst on his ankle that kept him out of spring football … extremely fast and runs with power … played 58 minutes as a freshman in 1984, 90 minutes as a sophomore and 36.5 in 1985 … injuries have greatly reduced his playing time all three seasons … an honor student throughout college.

1985 Media Guide: Injuries have kept him from contributing as he can … suffered another concussion in spring practice … extremely fast and runs with power … bench presses 365 pounds … moved from fullback to tailback.

1984: Figured to start in 1984 but a preseason concussion and a midseason shoulder sprain limited his play to 90 minutes and to just four starting assignments … averaged 5.1 yards per carry.

High School: Ran for 1,129 yards his senior year at Lancaster even though asthma prevented him from playing an entire game … holds the Ohio high school shot put record, 67′ 10 3/4″.